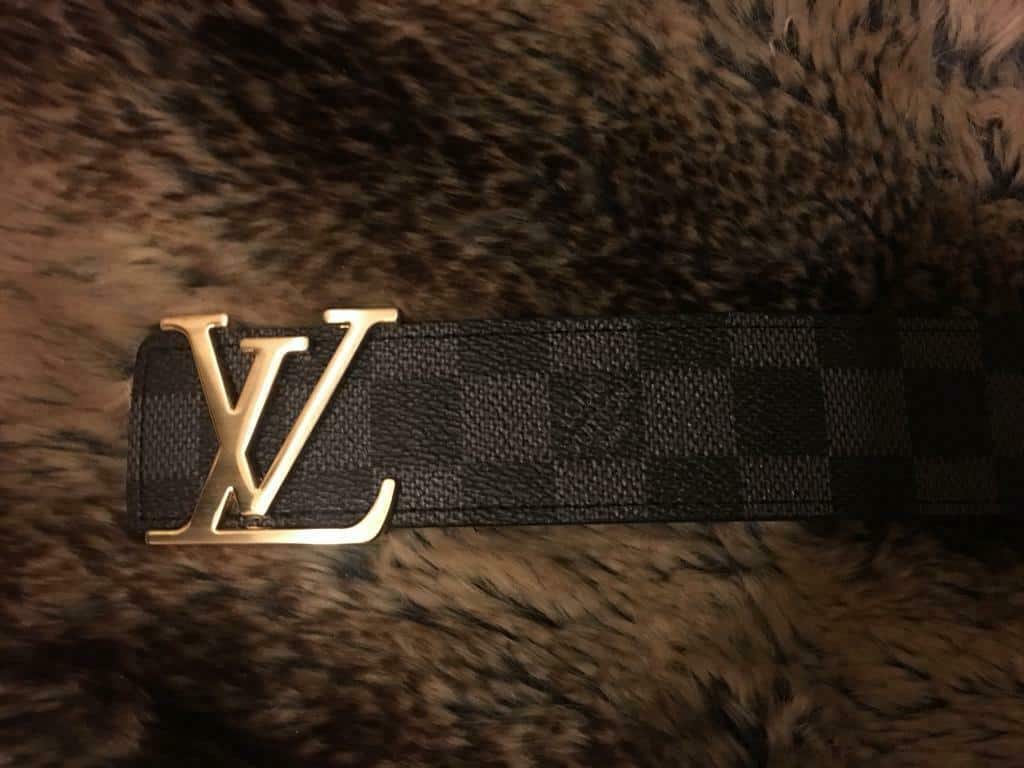 As there are a lot of replicas for the Louis Vuitton belts, and not only belts, we made this article easy to understand by placing the hand pointers to everything you have to look for when buying a Louis Vuitton Damier or Monogram belt. In this guide, we will inspect the counterfeit and the retail belts from the buckle to the receipt.

So, what are we waiting for? Let’s jump into the guide on how to legit check the Louis Vuitton belt.

The buckle is one of the most visible details on the Louis Vuitton belt, because this is mainly how people recognize a LV belt.

The main problem with the counterfeit Louis Vuitton buckles is that they are either too thick, too thin or they have some kind of inconsistency. As there are a lot of fake versions for the Louis Vuitton belt, the buckle problem may differ from a belt to another one.

On the right side of the LV buckle, we’ve pointed out how the replica bottom of the “V” has rounded corners and the authentic one has sharp corners. This can be seen on the two bottom points and on the curve found on the “inside” of the letter.

Over here, it is easy to notice how the counterfeit buckle is thicker than the authentic buckle. In order to notice this, we can take a quick look at the bottom line of the “L” in the LV buckle. It is obvious how the fake tip of the “L” is different.

Another important spot for the white colourway of the Louis Vuitton belt is the thickness of the serif at the top of the letters. In case you don’t know what the serif is, by this we’re talking about the decorative lines added at the ends of the LV characters.

Also, since we are at the top of the LV buckle, keep in mind how you have to check the distance at the top left side, where the “L” and the “V” overlap. The copy Louis Vuitton belt seems to have less distance between the two characters. Again, if we look here, we can easily notice the thickness of the two buckles and spot the counterfeit.

A good way to spot the thickness of the buckle is to check the vertical and the oblique lines in the “V” character. The replica lines are obviously wider than the authentic ones. It may be easier for you to spot this by looking at the point where the “L” and the “V” elements connect.

With this being said, we can move to the next step on how to spot fake Louis Vuitton belts.

The stitching from the end of the belt is too close to the end of the buckle and is lacking in quality. As highlighted with the hand emojis, it has to have a trapeze-like shape. Quite angled, but not exactly very sharply-angled.

Worth noting is that not even the top tier replicas that get the buckle right do not get this issue fixed, which is somehow ironical. It’s often the case that whenever there are multiple top versions of a replica, whatever flaw is solved on one batch is compensated by another flaw, and vice-versa. Probably this is a reason why there are no 1:1 perfect fakes and we are in fact happy that this happens since it allows us to be able to teach you how to spot a fake Louis Vuitton belt.

In the Louis Vuitton Monogram belt comparison linked below for the buckle, it can be easily noticed how the corner of the fake one is too rounded as well.

As we said before, there are many fake factories for the Louis Vuitton belts, and, we would like to mention how some blatant fake manufacturers get it wrong by making these corners too rounded, with an arch-like shape.

Step 3: Look out for the Louis Vuitton belt buckle’s placement

The authentic buckle is aligned as follows: the imaginary line between the left edge of the logo should be aligned with the half of the first set of full squares.

This may vary on the authentic belts since very few have this pattern aligned differently. However, 99% of the fakes come with this kind of pattern that you can see in the picture linked above.

Since we are still talking about the buckle, you can see how the bottom of the fake buckle’s “L” character is crooked and misaligned and how the retail one is flawless.

On the fake Louis Vuitton brown monogram belts, it’s simply a matter of having this buckle placed too far to the right side.

The pattern here is not an issue, this pattern is wildly varying on the authentic cases, it’s simply a matter of how far the buckle is placed from the edge.

Step 4: Verify the stitching on the Louis Vuitton belt

This is a really simple sign. It is visible to the naked eye how the stitching on the replica Louis Vuitton belt is too close to the edge of it.

Step 5: Check the Damier and the Monogram belt prints

As it can be seen in the fake vs real comparisons, the vertical lines in the checkerboard squares are significantly thicker on the fakes. In fact, this might be hard to spot with the naked eye, but we recommend that you refer to our app’s comparisons.

We invite you to download our app since the point of it is to, first of all, have an organised library with all of our guides, and more important have all these resources well divided based on the detail you are trying to analyse, of course, in this case, the Damier print, in a very quickly-accessible manner. Take this as an example: you are in a meeting, and you can use the app to access this step of the fake vs real comparison in a few clicks and to see the photo faster than reading.

Also, note how even in the buckle comparison above for the Damier white belt you can spot that.

For the monogram Louis Vuitton belt print here, the highlighted flowers are too big and we’ve put together this close-up comparison to highlight all of the details so it would be easier for you to notice the flaws on the fake Louis Vuitton monogram belt.

Step 6: Analyse the heat stamp on the LV belt

This heat stamp that we are talking about refers to the print that can be found on the rear side of your Louis Vuitton belt. The stitching richness on the left side is different from the authentic belt to the fake one. The fake belt has less stitching on the left rear side. Overall, the text font is thicker on the fakes, and the “®” is also different.

Step 7: Closely look for any sloppy craftmanship on your LV belt

We’re pointing out how on the front, an authentic LV belt would never leave their factories with this kind of inconsistency. What we mean is that the stitching thread is coming out on the replica belt. At the end of the day, the process of making these items is not fully automated and the human quality checkers would never allow a luxury item from this brand to hit the retail stores. We’re talking about +£400 items here.

Step 8: Flip the belt and check the rear side

Step 9: Inspect the receipt of your Louis Vuitton Belt

Fake receipts will vary and since LV is replicated in high numbers, we need to recommend the reader to keep an eye on for inconsistencies. Over here in this specific comparison, we’re pointing out the printed location of the store.

Upon a google search, it looks like the location of the Hong Kong Louis Vuitton store is spelled differently. Besides, spacing is inconsistent. The spacing between Louis and Vuitton is different than spacing between Vuitton and Maison on the replica LV belt.

Step 10: Check the packaging of your Louis Vuitton belt

Last but not least, we have the Louis Vuitton belt packaging. Your authentic LV belt packaging should not have low-quality printing like these replica belts.

How can I spot fake Louis Vuitton Belts in 60 seconds?

There are situations where you might be unable to go through each detailed authentication step explained above when you need to verify the originality of your Louis Vuitton belt. That is why we have compiled this quick 60-second solution to authenticating your LV belt. Below are the top 10 indicators that can help you determine if you have the original LV belt or a replica of it.

With all this being said, this brings us to the end of our guide on how to spot fake Louis Vuitton Damier and Monogram belts. We hope that our information was useful to you.