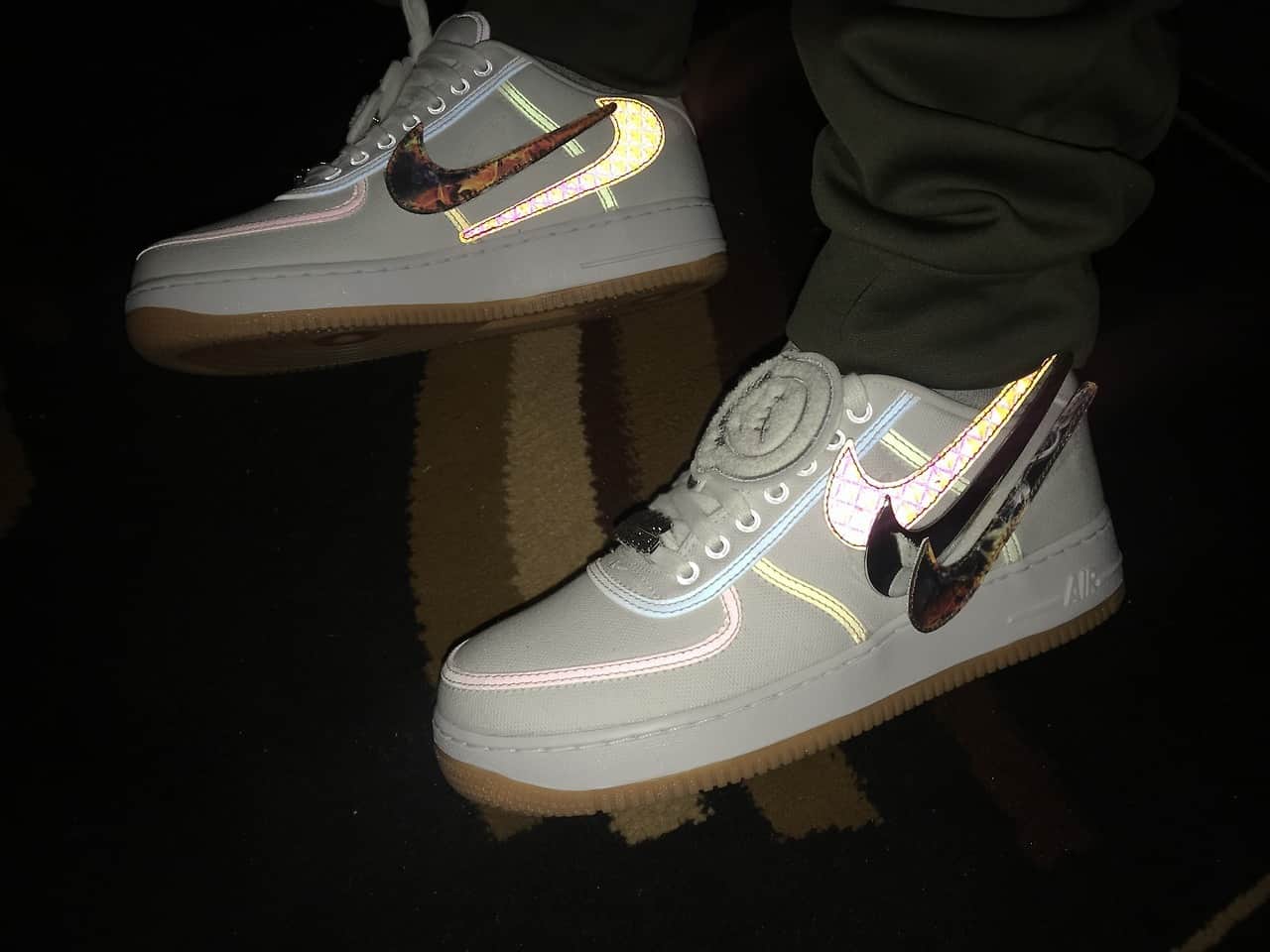 You are in the right place if you wish to know how to spot the fake vs real Air Force 1 Travis Scott sneakers.

In fact, we are here today to teach you how to spot fake Air Force 1 Travis Scott sneakers in fourteen simple steps with our ultimate guide.

Also, we would like to mention that we are going to refer to the Air Force 1 Travis Scott sneakers as just AF1 TS.

Now that you’ve got the main idea of what we are about to talk about today, let’s get to the seven steps on how to spot fake Air Force 1 Travis Scott shoes.

Want to learn how to spot fake Travis Scott Air Force 1 Fossil? We’ve also got a legit check guide for them here.

We consider the size tag being one of the most reliable spots to look at when checking the real vs fake Air Force 1 Travis Scott sneakers because most of the time, the replica manufacturers don’t pay enough attention inside the sneakers, and this is flawed the most.

Besides the size tag, we are here with many other spots to look at in order for your Air Force 1 Travis Scott legit checking to be easier.

As we’ve said previously, we consider the size tag being one of the most reliable spots to look at when legit checking the Air Force 1 Travis Scott sneakers.

First of all, you can easily notice how the Nike Swoosh logo on the top of the size tag isn’t having the right pattern and form that it has to be.

The legit Nike Swoosh logo in the middle of the size tag is round and perfectly curved, with no flaws.

Besides, it is visible how the “MADE IN VIETNAM” and the “FABRIQUE EN VIETNAM” texts are significantly thicker and bigger on the fake size tag, and on the legit size tag, these are thinner.

Step 2: Verify the 3M reflective lines on the sneakers

For the second step of the real vs fake AF1 Travis Scott guide, we are going to analyze the coloured glowing 3M lines on the sneakers.

As you can see in the first picture above, the main problem with the fake 3M lines is that these are less concentrated.

By that, we mean that the fake AF1 TS sneakers have the 3M lines looking lighter and less coloured than the legit AF1’s.

Now let’s also have a look at the 3M lines from another angle on both the fake vs real Air Force 1 TS.

Again, you can notice the same flaw on the fake AF1’s; the fake Air Force 1 Travis Scott shoes have a lighter concentration for the 3M lines, and the legit sneakers are a lot colourful.

Step 3: Check the Cactus Jack logos on the lacing area

Going a bit above from the 3M lines, we can easily notice the big Cactus Jack logos that are covering over the laces.

It is really easy to notice in the real s fake AF1 Travis Scott images above how the fake sneakers have an icy blue outline for the Cactus Jack logos over the laces.

On the authentic pair, the Cactus Jack logos have a light grey outline which is completely different from the replica sneakers.

Because we were at the lace Cactus Jack logos, let’s go a little lower and let’s analyze together the way that the grills below these logos look like.

The fake Air Force 1 Travis Scott pattern of the grills seem to have less metal material put into the grill itself.

When we say pattern, we are talking about the alignment of the metal dots and the deepness of them.

In fact, the fake shoes seem to have negative/empty spaces between some of the grills, and they are obviously less dense and less squeezed deep into the font.

As for the fifth step of the real vs fake AF1 Travis Scott legit check guide, we are going to check the Nike Swoosh logos.

You can see how the fake Swooshes are too small by looking at how the Nike AIR logo is positioned too far apart to the last 2 Swooshes on the fake letter. The authentic ones are bigger and there is less distance to the NIKE AIR Logo.

Now let’s flip the sneakers to the rear side and let’s have a quick look at the rear “A I R” text on both the fake vs real AF1 TS.

As you can see in the image above, we are talking about the reversed “A I R” text that’s stitched in at the top of the patch on the rear side.

And, the fake AF1 Travis Scott sneakers have the letters “A” and “R” looking a lot thicker than they have to look like because the replica manufacturers used too much material in there.

Let’s move on to the front of the shoes and let’s have a look at the toe box of the AF1 TS sneakers.

Most of the time, the problem with the replica AIr Force 1 Travis Scott sneakers is that the toe box is too high.

By that, we mean that the front area of the sneakers is too arched and it’s not as low as the one on the legit AF1 TS shoes.

Step 8: Inspect the midsole stitching on the AF1 TS sneakers

Now, let’s go a little lower to the midsole and let’s analyze together the way that the stitching in the gap on the midsole looks like.

It is visible in the pictures above that the fake Air Force 1 Travis Scott sneakers have the midsole stitching looking a lot thinner, smaller and narrow.

On the other hand, the legit stitching o the midsole is looking bigger and thicker, with no narrowing.

Step 9: Check the stars on the sole of your sneakers

As for the ninth step of the fake vs real Air Force 1 Travis Scott authenticity check process, we’ll have a quick look at the stars on the sole.

As you can see in the fake vs real Travis Scott AF1 images above, the main problem with the fake sole of these sneakers is that they usually have these stars looking less defined and too thick.

Because they are less defined and too thick, the fake shoes have their stars looking like some dots instead of actual stars.

How can I spot fake Air Force 1 TS in seconds?

The nine fake vs real Air Force 1 Travis Scott steps outlined above are well detailed and it will be time demanding to perform each authentication step when you need to confirm the originality of your Jordans.

That is why we have compiled this quick 60 seconds solution to authenticating your Air Force 1 Travis Scott sneakers. Below are the top nine indicators that can help you determine if you have a fake pair of AF1 TS or the real deal.

Where can I get my Air Force 1 Travis Scott authenticated? The AF1 TS authentication service

That brings us to the end of our real vs fake Air Force 1 Travis Scott guide. We will continue to update this article as better and newer comparisons are put out.