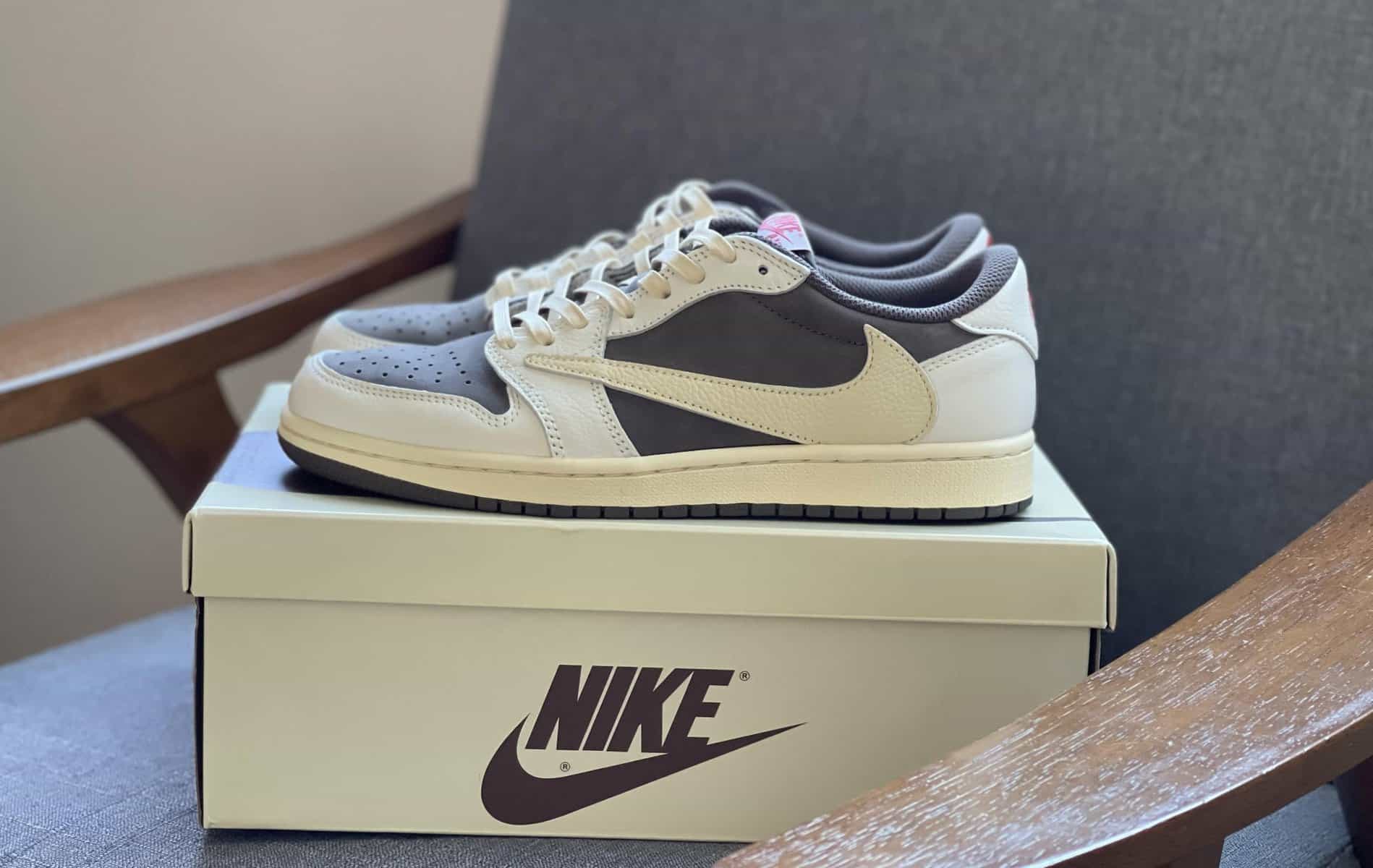 The most relevant detail to spot fake Travis Scott AJ1 Low Reverse Mocha is the interior tongue label. Fake pairs always have their text at the wrong thickness, and in most cases, the text is even misplaced. This is a detail that’s never to be seen on the real Travis Scott Jordan 1s, as the text is always perfectly detailed on the real deal.

Travis Scott is back at it again with the iconic reverse-Swoosh Air Jordan 1s, and he’s added the Reverse Mochas to the line-up of Air Jordan 1 Lows.

Speaking of which, if this is not the colourway that you’re looking to legit check, then have a look at these other tutorials that we provide: Dark Mocha Lows, Fragment Lows.

If you’re about to buy the Tarvis Scott Jordan 1 Low Reverse Mocha and don’t know whether you’re looking at a real or fake pair, there’s no need to worry anymore. This tutorial will teach you everything about legit checking these shoes.

Step summary: Fake shoes always have their text misplaced and at the wrong font-weight.

The interior side of the tongue is what we’ve always believed to be the best authenticity tells on the Nike Air Jordan 1s. Therefore, we always recommend looking at this label first, if possible.

This image shows you how the fake Travis Scott Jordan 1 Low Reverse Mocha pair has the most common flaws on the fake shoes that we’ve previously pointed out.

For instance, if you look at the “SWOOSH” text at the top of the label, you’ll see how the fake text is too thick and how the letters “O” are a bit too small. On the real pair, it’s actually the opposite.

Regarding the “SWOOSH®” text in the middle of the label: the fake pair’s letters are too thick (especially noticeable on the “SW”), and the real ones are thinner.

Lastly, the “VOTRE” print on the lower-left side of the label is too big and yet again too thick on the fakes. As always, the real pair’s text is the opposite: thinner and smaller.

Just like the Dark Mocha Travis Scott Jordan 1s, the Reverse Mocha colourway also uses suede on most of its panels.

If you look at the brown panels on the real shoes, you can observe how some areas are darker than others. As soon as the real suede is touched, it leaves traces behind.

This effect is almost never present on the fake pairs. If it is present, it’s definitely not as detailed as the real one, which leaves a huge gap in the quality of the fabrics used to build the real vs fake Travis Scott Jordan 1s.

Step summary: Fake sneakers tend to have their toe boxes too flat.

The third authenticity spot that we’re going to look at is also the second best one to consider when legit checking these shoes.

Now, we’re going to talk about the general shape of the Air Jordan 1 Lows, which is mistaken as well on the fake Reverse Mocha Travis Scotts.

The image with the fake vs real Air Jordan 1 Low Travis Scott Reverse Mochas shows you how the fake pair’s toe box is too flat.

What does that mean? It means that the fake pair’s toe box is too little curvy, and the white leather above the midsole is too small.

The genuine pair’s overall look of the toe box is way curvier and rounded, and above, the white leather is a bit bulkier and bigger than the fake pair’s leather.

Moving further to the fourth step of the guide on how to spot fake Jordan 1 Low Travis Scott Reverse Mocha, we now have to focus on the medial text.

The medial text is the red ‘Cactus Jack’ logo visible on the interior profile sides of the shoes.

Want to learn how to spot fake High-Top Travis Scotts? Check out the guide for the Dark Mochas and the Fragment Jordan 1s.

The fake Travis Scott Jordan 1 Low Reverse Mocha pair’s ‘Cactus Jack’ text is too thin. This can be the most noticeable if you look at the letters “C” and “A”.

At the same time, the three simple lines visible above the text are too thin on the fake pair. The same lines are thicker on the real Travis Scott 1s.

Step 5: Take a look at the rear details on your Air Jordan 1s

Step summary: Keep in mind that fake pairs always have their stitching too little dense.

Flipping the shoes to the rear sides, you will notice how one shoe has the Cactus Jack face logo, and how the other shoe has the classic Air Jordan logo. The same as on the Dark Mocha AJ1 TS Low.

We’re going to talk about each of the shoes individually. First, let’s start with the Cactus Jack face logo.

The fake vs real Jordan 1 Travis Scott Low Reverse Mocha image above shows you how the fake Cactus Jack logo has its hair too little dense.

By that, we mean that there are not as many stitches as they need to be. Notice how the real pair’s hair is denser, as there are many more red threads.

Aside from that, if you look at the white stitching all around the patch with the Cactus Jack face logo, you can see how the fake pair’s stitches are too thin and small, and how the real ones are thicker and longer.

Let’s take a couple of seconds to talk about the Air Jordan logo on the other shoe as well.

The image with the fake vs real Travis Scott Jordan 1 Lows above shows you how the fake pair’s wings in the Air Jordan logo are too thin, and how the real ones are thicker.

Since the wings are too thin on the fake pair’s logo, there’s also way too much empty space in-between the wings. That’s something which never occurs on the real Travis Scott 1s in this colourway.

Step 6: Check the perforations on the toe box (holes)

Proceeding to the sixth way on how to tell fake Jordan 1 Low Travis Scott, we now have to take a look at the shoes from a top-down view.

In this picture of the fake vs real Air Jordan 1 Low Reverse Mocha sneakers above, you can observe how the holes on the replica pair appear to be way too small.

The same holes on the real sneakers are larger, and they generally have a bigger look than the ones seen on the fake pair.

The seventh way on how to spot fake Travis Scott Jordan 1 Low Reverse Mochas forwards us to the most iconic part of the shoes – the reverse Nike Swoosh logo.

The image with the authentic vs fake Travis Scott Jordan 1 Low Reverse Mocha pairs above shows you how the fake pair’s stitching on the Swoosh is too thin. The real pair’s threads are thicker.

At the same time, the fake Jordan 1s also have their stitches being too short, while the ones on the authentic pair are longer.

Step 8: Look at the exterior tongue’s badge on your shoes

Step summary: The “®” symbol on the fake shoes is usually too small.

We previously spoke about the interior tongue label on these shoes. Now’s the time to look at the exterior one as well.

Looking at the real vs fake Jordan 1 Low Travis Scott Reverse Mocha sneakers, you can notice how the “®” character looks too small on the fake pair.

The same inscription is bigger on the real shoes.

How can I tell fake Travis Scott Jordan 1 Reverse Mocha in 30 seconds?

We understand that you might be short on time, and hence, you don’t really have enough time to read the full guide. That’s why we’ve prepared below the best ways to tell fake Travis Scott 1s:

If you need help with the authentication of your Reverse Mocha 1s we’ve got you covered.

All you have to do is send us good-quality pictures of your Travis Scott Reverse Mocha Jordan 1s sneakers and we will get back to you with the results within 24 to 48 hours. The results will also come with a report on why we believe your sneakers are fake or authentic.

That brings us to the end of our real vs fake Reverse Mocha AJ1 Low legit check guide. We will continue to update this article as better and newer comparisons are put out.